‘We have to start with kids’: The rise of gender-neutral childrens’ clothing

Seven-year-old Nicholas Demetriou hasn’t got time for gender stereotypes. He chooses clothes that he likes, regardless of whether he finds them in the girls’ section or the boys’.

“[Nicholas] often chooses clothing with sequins, cats or glitter. And he loves wearing leggings, because they fit under his favourite knee high boots,” says his mum, Heidi Demetriou, 36. 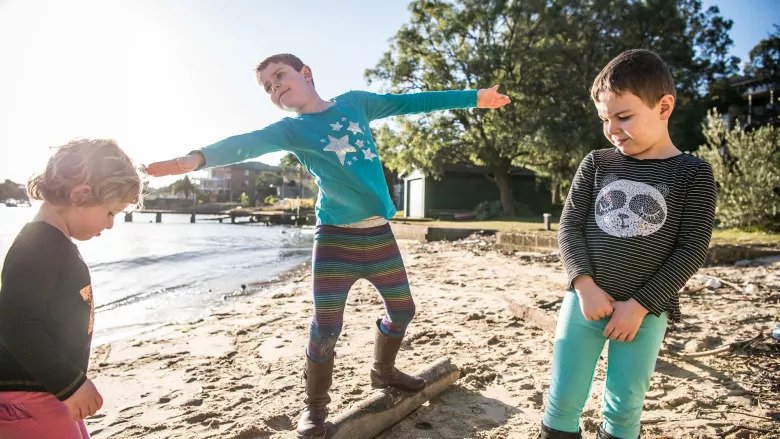 Although Nicholas’ grandmother worries that he will be teased, he hasn’t received much negativity about the way he dresses. “He’s had a few comments, but he doesn’t pay too much attention,” says Demetriou.

Demetriou, who lives in Putney, Sydney, is one of a growing number of parents who are shunning traditional stereotypes in kids clothes. In fact, it is a shift that we are seeing on a global scale.

Target (in the US) recently announced the roll out of a gender-neutral (or “all gender”) kids’ clothing line to 1,700 of their stores.

The line, designed by Toca Boca, features playful characters such as a pineapple in sunglasses, a hamburger with legs and a purple pile of poo.

Speaking to Co Design, Toca Boca’s design director Mathilda Engman said the designs had come from combining the everyday and ordinary with something you wouldn’t expect.

“It’s a silly [humour] and quirkiness that resonates with both girls and boys, and doesn’t fall into gender stereotypes,” she explained.

Of course, it’s not just big brands that are embracing the push for gender-neutral kids’ clothes. Sydney based Doo Wop Kids has been designing and manufacturing gender-free clothes since 2015.

Creative director Wendy Zakaria says she started the brand because she couldn’t find clothes for her son in mainstream stores. “My son loves bright colours, especially pink, and patterns and it was so hard to find these prints,” she recalls.

Allowing kids’ to express themselves freely has been a big part of the brand’s philosophy. “If we have any hope of building a world where people can wear what they want and be who they want to be, we have to start with kids,” says Zakaria.

Since launching Doo Wop Kids, Zakaria has observed a rise in the number of parents actively looking for gender-neutral clothes and she’s pleased to see that bigger brands (such as Target) are starting to offer more diversity in their kids’ lines.

If we have any hope of building a world where people can wear what they want and be who they want to be, we have to start with kids.   Wendy Zakaria, Doo Wop Kids

“It’s great that these large department stores jumping on board and following this fast moving trend,” she says.

But some feel that gender-neutral clothing doesn’t push the issue of gender stereotyping far enough.

Dr Tamara Browne is a lecturer in health ethics at Deakin University. She says that while the move toward gender-neutral clothing is positive, it wouldn’t be necessary if kids’ clothing weren’t so segregated.

Dr Browne notes the messages that we subtly give to children (through clothes, toys and popular culture) have consequences.

“It impacts on society as a whole – you can see the effect of it in the rates of female employment in male dominated sectors such as finance and construction. And vice versa, we see fewer men in childcare and nursing,” she explains.

Heidi Demetriou agrees. She says that although gender-neutral clothes offer more variety, she will continue to let her boys pick out the things they like, regardless of which side of the aisle they find them.

“I tell them that there’s no such thing as girls’ things and boys’ things,” she says. “Clothes are for people.”